Akasha luxury villa rental is pleased to hear that the ARC race is about to start very soon.

The ARC 2010 fleet leave Las Palmas, Canaries (Spanish island) for Rodney Bay in Saint Lucia, crews from the 205 yachts, of all shapes and sizes are berthed in the marina and took part in the official ARC 2010 Opening Ceremony.  The final 34 yachts are expected to arrive in Las Palmas over the next few days, bringing the fleet total to 239 yachts, an all-time ARC record and that should make the race an all time success.  All of these will sail past Akasha luxury villa rental as they cross the finish line and into Rodney Bay.

At midday Sunday 14 November hundreds of ARC participants took part in the Official Opening Ceremony for ARC 2010.  Flag bearers from 28 different nations representing the countries of the yachts in this year’s event led the procession as it made its way around the marina. The grand parade had a real festival atmosphere as crews gathered at the northern end of the marina and were led by an enthusiastic brass band cheered on by local spectators.  This sounds great and Akasha villa rental in St Lucia hopes the start of things to come when they get to St Lucia, West Indies.

The fiesta atmosphere continued with ARC participants and local people taking part in Don Pedro’s famous International Dinghy Race.  Water bombs and flour missiles were commonplace! A prizegiving for the dinghy race and Don Pedro’s dockside BBQ went on late into the evening.  So St Lucia will, I know, create even a bigger party atmosphere once the race is under-way and when they finish in Rodney Marina. When you stay at Akasha Villa Rental you get to enjoy that atmosphere as the Marina is only a few minutes drive from your luxury retreat.

Akasha St Lucia luxury villa is pleased to inform you:

* ARC 2010 will depart from Las Palmas de Gran Canaria on Sunday 21 November.
* The finish destination is Rodney Bay Marina in St Lucia, a distance of 2,700 nautical miles from Las Palmas and it’s a passage that will take most of the yachts between 18 and 21 days.
* Whilst fundamentally a fun rally for cruising yachts, the ARC does have a more serious Racing Division, run under the auspices of the Royal Ocean Racing Club (RORC). Yachts in the Racing Division are not permitted to use their engines for propulsion (unlike the cruisers), although use of autopilots is allowed.
* ARC Official Entry list – ARC yachts
* ARC 2010 is sponsored by the Tourist Board of Gran Canaria, the Port Authority of Las Palmas, the Saint Lucia Tourist Board, Rolnautic, and is run in association with Yachting World magazine.

So our guests who will be in residence at Akasha – the luxury villa rental, get a great view of the boats as they sail around the north of the island, past the finishing line and into Rodney Bay – all visible from the terraces, and every one of the bedroom suites. 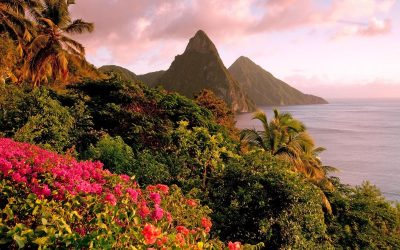